A New Chapter in a 39 Year Old Story 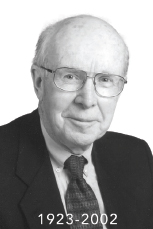 Alastair Ross, a successful energy industry businessman and entrepreneur, was a visionary who recognized opportunities to grow Calgary’s economy through our city’s technology sector.

He believed that bringing highly educated people to Alberta to engage in research and commercialization would generate the jobs and wealth needed to sustain and enhance the quality of life and opportunities for Albertans. Alastair knew that Calgary could compete on a global stage.

More than simply having vision, Alastair worked to bring together the right leaders and partners to make that vision a reality and flesh out the concept that would become the origins of our organization - the Calgary Research & Development Authority (CR&DA). In 1981, he became the founding chairman of CR&DA, later to become Calgary Technologies Inc. (CTI), followed by a seven year partnership with Innovate Calgary.

In 2000, the newly expanded 120,000-square-foot CTI building was named the Alastair Ross Technology Centre (ARTC). It was built upon the vision to help diversify Calgary’s economy and meet the growing needs of its advanced technology sector.

More than bricks and mortar, this work is about building a community and having a place where entrepreneurs and startups can come together to connect, collide and grow. It is about showcasing the technology and innovation happening in our city.

Alastair continued to actively support the technology sector and CTI until his death in 2002.

Platform Calgary is the next evolution of our organization.

As Platform Calgary, we are continuing Alastair Ross’ 39-year legacy by working together and supporting a large community of entrepreneurs and innovators. We exist to fulfill, and are guided by, the overall purpose of generating shared prosperity in and for our city - building upon our city’s potential to become a global innovation hub for startups and innovation.

In January 2021, Platform Calgary and Startup Calgary joined forces to bring together the resources and partners of Calgary's tech startup ecosystem to create shared prosperity that will benefit all Calgarians. By coming together, Platform Calgary and Startup Calgary form an even more powerful champion for startups and will better align programming, events and resources for Calgary’s startup community.

Empowering people // Building the next economy

Our Mission: Empowering people // Building the next economy

These are exciting times. The next wave of shared prosperity is being generated in our city, in front of our eyes. By working together, we can make Calgary a global hub for startups and innovation.

Platform Calgary is focused on three core areas of work: