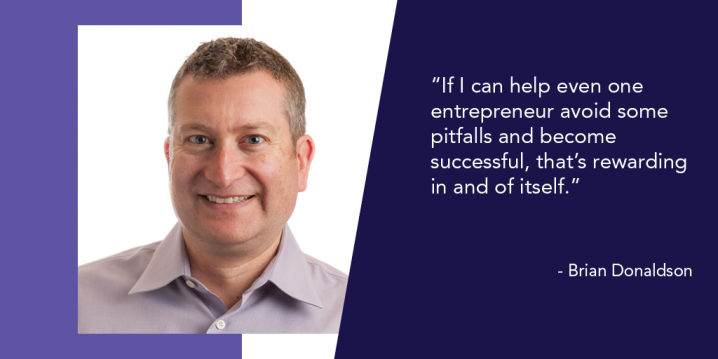 Mentorship is an important part of the Junction program. For this Fall’s Junction cohort, the startup founders will be receiving invaluable mentorship from an expanded team of Community Advisors - a group of Calgary entrepreneurs and innovators who have the knowledge and experience to help guide our founders. This week’s feature is Brian Donaldson!

With a background in computer science and engineering, Brian is a “technical guy at heart.” After university, he worked at Imperial Oil for a few years before realizing he wanted to pursue tech. He started in tech at SMART Technologies, where he was hired-on as the third software developer.

Brian has been on sabbatical for a little over a year now and is focusing on giving back to Calgary’s tech community. Since there wasn’t much formal mentorship programming when he was starting out as an entrepreneur, he sees the benefits of programs like Junction and is passionate about helping young entrepreneurs.

“A lot of the things I did were self-mentoring which was hit or miss. I made a lot of mistakes along the way,” Brian says. “If I can help even one entrepreneur avoid some pitfalls and become successful, that’s rewarding in and of itself.”

When he isn’t mentoring new entrepreneurs, Brian spends his time outdoors hiking, skiing, and mountain biking. He also practices yoga daily and is an avid reader.

Brian’s book recommendations: What got you here won’t get you there by Marshall Goldsmith (if you want to take your business to the next level), Running with Scissors by Augusten burroughs (for a good laugh), and American Dirt by Jeanine Cummins (fiction you won’t be able to put down).