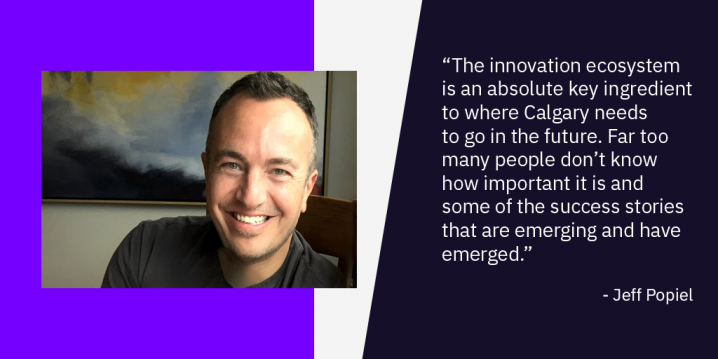 Mentorship is an important part of the Junction program. The founders in this spring’s Junction cohort are receiving invaluable mentorship from an expanded team of Community Advisors — a group of Calgary entrepreneurs and innovators who have the knowledge and experience to help them grow. This week’s feature is Jeff Popiel!

Jeff has, what he describes as, an “eclectic resume.” Throughout his career he’s worked in consumer packaged goods, in the entertainment industry, as a music festival producer and in tech.

These days, Jeff has “one of the coolest jobs in Calgary,” as president of Village Brewery. His day to day is filled with planning for the next ten years of the brewery, which involves a lot of entrepreneurial thinking.

“There’s a future state that’s coming more and more into focus with us. We build the plan and start executing, just like you would in a startup, even when we’re 10 years old,” he says.

Jeff has been involved in the community, largely in the arts and culture side, for many years. He’s been a part of the innovation community as well, participating in events, making connections and having an early interest in Calgary’s tech scene.

Fully supporting Platform’s vision and Calgary’s innovation community, Jeff found that becoming an advisor was a rewarding way to help founders on their journey. He jokes that being an advisor is like being a grandparent: “You get all the benefits and the rush of it, without having to do any of the work.”

Seeing so much entrepreneurial talent, he believes Calgary’s future is bright. In ten years, he’d love to see Calgary have a well-established reputation for being an innovative leader in the startup world — and he thinks Calgary has what it takes to get there.

“I love everywhere I've lived, but Calgary’s home because of that attitude. It feels like we’re big, but we’re still family.”

Jeff’s recommendations: “The greatest resource that is perhaps not taken advantage of as much as possible is the personal connection and outreach you can do with any type of business leader or innovator. I can’t tell you how many times people I know, who are successful, have picked up the phone and said, ‘Can I have fifteen minutes of your time?’ The people who have something to offer are flattered to do that.”