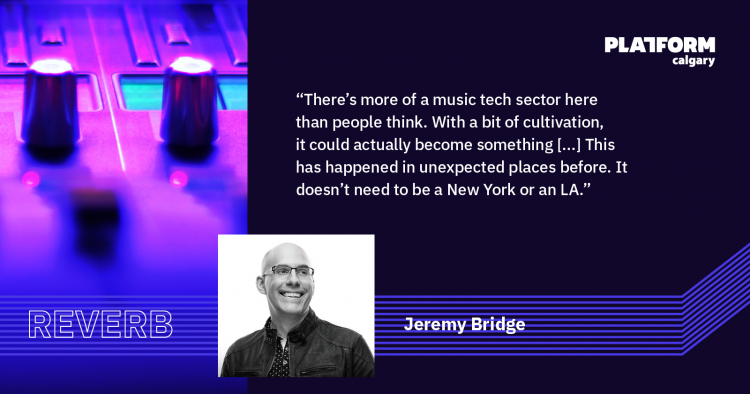 Mentoring and collaboration are key to success as a startup. This fall’s cohort of Reverb received invaluable guidance from Advisors — an esteemed group of entrepreneurs and musicians from across Canada who are generously offering to share their wisdom. This week, we’re featuring Jeremy Bridge!

Jeremy Bridge is the CEO & President of PK Sound, a loudspeaker company that designs, manufactures, and deploys advanced loudspeaker solutions that raise the bar of professional sound. Known for their transparent, full-bodied, powerful sound, the company was born out of the marriage of acoustic engineering and human emotion — they measure their performance as much in the reaction of a devoted fan as in the read-out of a lab instrument. PK Sound has set up audio for Shambhala Music Festival, Electric Daisy Carnival in Las Vegas, as well as in Mexico which saw a crowd of 100,000 people.

PK Sound started as a hobby, and a way for Jeremy to make some extra cash while studying Engineering at the University of Calgary. Despite joking that he chose engineering “because my mom told me to”, it came naturally to him; growing up in Red Deer, Jeremy owned a car audio shop and has always been passionate about engineering and design.

After graduation, Jeremy did a stint in oil and gas while pursuing PK Sound on the side. During that time, his now-wife introduced him to Shambhala — a small festival at the time that started as an outdoor gathering of 500 people and has since exploded, hosting crowds of 18,00 in recent years.

During that time he was also networking — “making friends” as he phrases it — and together they watched as electronic music went from being relatively unknown to blowing up in North America.

“The people who were my friends sleeping in my basement, some of them were now DJs making hundreds of thousands of dollars a show,” he says.

With PK Sound growing steadily, after four years in oil and gas, Jeremy stepped away from corporate life.

These days, his role as CEO & President means he “sets the strategy and then goes where it needs to go”. Jeremy’s involvement with Reverb has been an easy fit — he’s able to speak to both music and entrepreneurship.

“It’s been enjoyable. I hope I’m helping a little bit and I’m learning too so that’s good for both ends of the equation.”

Having been in Calgary for close to two decades now and grown a successful business here, Jeremy still proudly calls it home.

“I kind of like that Calgary in my industry is a bit of an underdog. When we tell people we’re from Calgary they’re kind of like ‘what?’”

“I’ve been telling people for a while that there’s more of a music tech sector here than they think. With a bit of cultivation, it actually could become something,” he says. “This has happened in unexpected places before. It doesn’t need to be a New York or an LA.”